A Theology of Rape 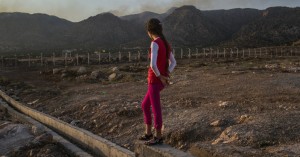 A Yazidi girl from the New York Times article: ISIS Enshrines a Theology of Rape

The article linked below appeared in the New York Times this morning and describes the development of a human trafficking network within ISIS and the theological justifications used by their leaders to condone rape of women and girls. In it, escaped Yazidi captives tell their stories. I was shocked, disgusted and disturbed by the treatment of these girls and especially so because their rapes were surrounded by acts of prayer and justifications from the perpetrators that, in essence, blamed the victims–if they had not been infidels, they would not be treated so.

Then I reined in my outrage and asked myself: is this anything new? Once a person/group decides that another race, religion, or gender is less than human, he can justify whatever he does. It happened in this country in our own slave history–owners repeatedly raped their slaves. It still happens in this country–not just in other parts of the world, but here too, lest we be tempted to point fingers at these “barbaric” people as if we’ve evolved above such things. Unchecked, hiding in the shadows, humans are capable of all manner of atrocities in any country, anywhere. One need only scan a few days’ worth of news article to see that.

Yes, ISIS’s deeds are horrible. Yes, Boko Haram commits cowardly inhumane acts. I am not diminishing the horrific nature of their crimes. My emotional response: I would love nothing more than to see their own barbarity turned back on them. But there is a bigger picture here. These groups have developed a “culture” around their behavior that makes it socially and morally–even theologically–acceptable for them to commit these heinous acts. If someone raped one of their little sisters, they would probably behead him. The difference: the captives are not considered human, they’re property. And it is no different for the wealthy Coloradan, whose purchased domestic worker is his to rape at will. We, as a combined human race, must say that NEVER is it right for one human to do this to another, that no religious conviction, no social conviction, no caste system, no economic condition can justify the brutality of rape. This requires a basic understanding that all humans have the right to be treated as humans, not chattel, even if we dislike them or don’t agree vehemently with them.

So, even though my emotions would like to see the barbarity returned onto the perpetrators in kind, my moral and ethical code says they must be treated as human beings, deserving of due process and respect. We need to process these actions as war crimes in the world court.