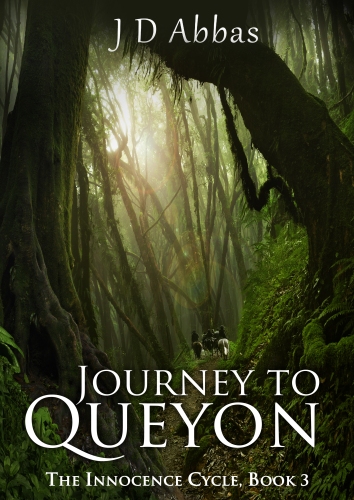 Rescued from enslavement and adopted by two leaders of the realm, Elena has found a new home at Kelach and the safety to explore her developing powers. But when a guised stranger infiltrates the keep and threatens her, Elena learns her birth father is alive and will risk anything to get her back, even collaborating with ancient evils.

This revelation sends her adoptive fathers, Celdorn and Elbrion, into the dangers of Penumbra and ultimately leads them to move Elena to the safety of Queyon. Using secret routes, the journey is long and fraught with opposition from Anakh, her eidola, the Zakad, and humans from Elena’s village—all who want to control and use her powers.

The children rescued from Anakh’s compounds also set off for Queyon, via the main trade route, escorted by Guardians and pursued by the same enemies. Mishon, the six-year-old from Greenholt whose father was killed by Anakh’s forces, rises as a leader and protector of the terrified children. Along the way, he receives assistance from the great forest of Alsimion and the powerful beings that live there—and inadvertently discovers a hidden treasure.

Eventually, the two groups converge and face the perilous crossing of the Pallanor Mountains with unexpected betrayals and devastating losses. As Elena knew even before they left Kelach, not all will survive the journey to Queyon.